InferKit's text generation tool takes text you provide and generates what it thinks comes next, using a state-of-the-art neural network. It's configurable and can produce any length of text on practically any topic. An example:

While not normally known for his musical talent, Elon Musk is releasing a debut album

While not normally known for his musical talent, Elon Musk is releasing a debut album. It's called "The Road to Re-Entry," and it features an astounding collection of songs... (continued)

The tool can be used through either the web interface or the developer API. Get started by creating an account. 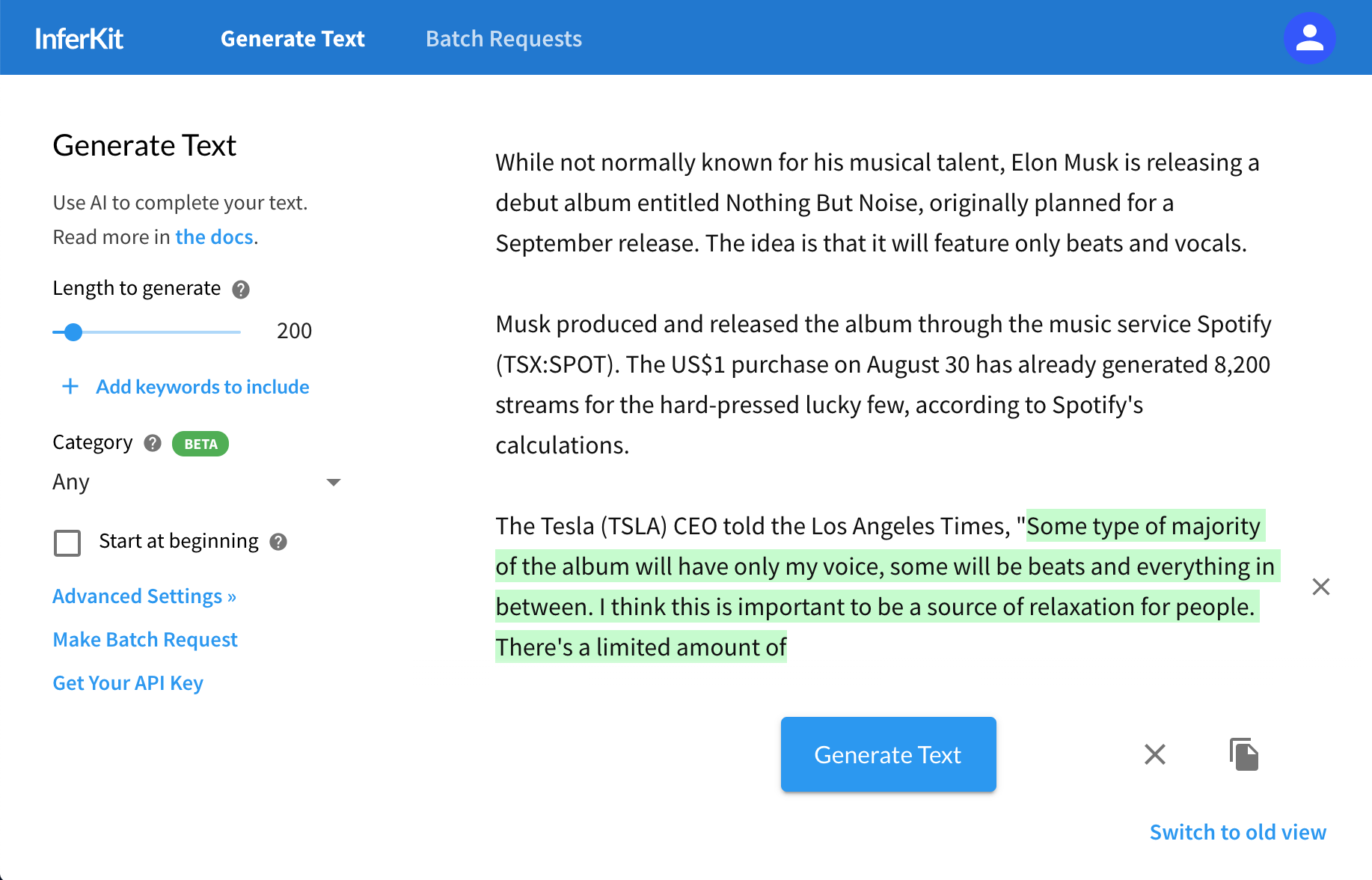 Who is this for?

Creative and fun uses of the network include writing stories or poetry. Other use cases might be marketing or autocompletion.

App developers can use the API in their own games or other projects.

The generator can only comprehend a certain amount of text at a time (currently at most 3000 characters) so if you give it a longer prompt then it won't use the beginning.

A word of caution

The generator may produce offensive or sexual content. Use at your own risk! This is because it was modeled on a great variety of different web pages, some of which contained such content.

InferKit was created by @AdamDanielKing. It leverages my experience creating and running one of the biggest AI demo sites on the web, Talk to Transformer. Owing to traffic from the Verge, the Next Web, Wired, the BBC and others, the site has reached millions of users.

Does my prompt get stored or used to train the network?

No. The network is already trained and does not learn from the inputs you give it. Nor do we store them.

Who owns the generated text?

This seems to be a complicated issue. We can't give legal advice, so if you rely on a solid answer you'll need to consult a legal professional. We do however waive any rights we may have in the text you generate and grant you licence to use it for any purpose (to the extent that we have that right), royalty-free and without warranty. You don't have to credit us anywhere.

To hint at the complexity of this issue, consider that the neural networks were originally: 1) designed and trained by large tech companies who licensed their code under the MIT license, 2) learned from millions of web pages containing content in which many people hold copyright, 3) are hosted by us (we waive all rights to the content) and 4) are conditioned on the prompt you give it (your own content).